How to Use Precommitment to Reach Your Goals & Beat Procrastination! 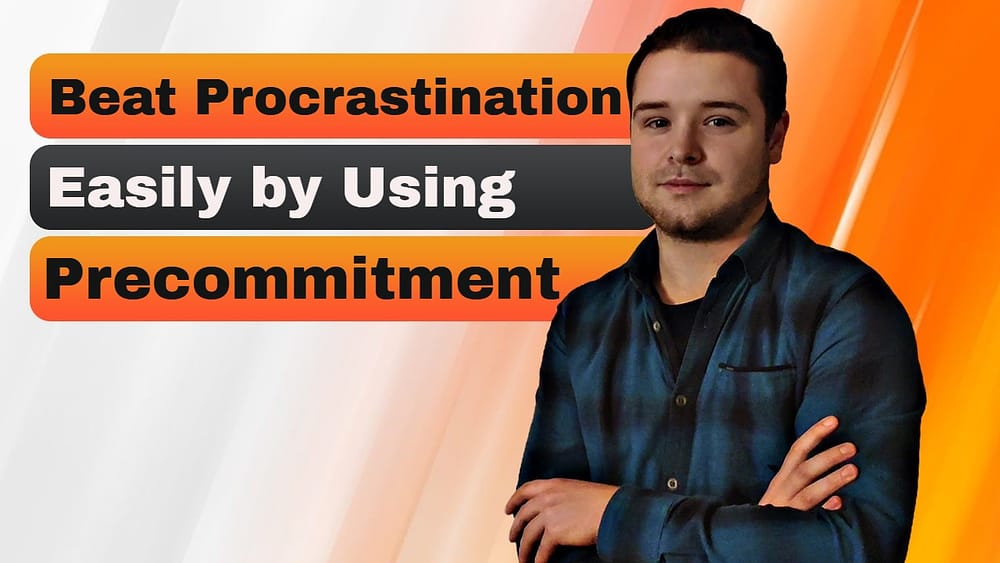 I bet you have one of them, right?

Someone so diligent and disciplined it almost scares you. A person who knows what to do, and has all the skills and capacities to accomplish anything.

He or she does not complain, plans ahead for the future instead of doing what is comfortable now. This person seems wonderful and admirable in every way!

So, who is this mystery person…?

I’m talking about Future You.

That stuff is hard for you, and robs you of enjoyment in the moment. Besides, Future You is 10X as capable as you are, so it makes sense, right?

When the time comes where the tasks really have to be done, it’s Present You that shows up instead of Future You!

The work piles on, gets done hastily, or not at all. Now these tasks seem even MORE daunting!

If you are a chronic procrastinator, the above will likely hit real close to home! But why do we put things off until later, instead of doing it now?

That’s what we’ll go over in this blog post!

Also, I’m going to share a way you can avoid falling victim to procrastination in certain cases! Sounds good?

The Hidden Culprit Behind Our Actions

At the base of the problem is the “Present Bias“.

This is part of our unconscious and everyone falls victim to it (some handle it better than others though). It’s one of the biases that cause bad decisions.

So what is the present bias?

I remember we had that question in an economics class. About 60-70% would rather have the €100 now, rather than a higher payoff later.

That’s the present bias at work.

We derive more pleasure from good things NOW than we do for equal or even greater benefits in the future.

Painful things or hard work today feels worse than an even greater workload in the future..

We are biased towards the present (hence the name) and discount the future. This is why we think things will be easier on us in the future, and we put things off from today.

The present bias is only ONE of the biases that make us cause bad decisions daily. I will be covering them on this blog as well, so keep an eye out for future posts.

How to Counter the Present Bias

Now that you know why we procrastinate, what can we do about it?

The answer is simple:

Because of the present bias, we don’t feel as bad about giving up something in the future as we would giving it up today. And that’s exactly the tool you can use to make improvements in your life! We will turn the present bias around and use it in our favor.

We call this tool Precommitment.

An example of precommitment is the “Save More Tomorrow” program. In an experiment, workers started out by saving a small percentage of their income but committed that they would save a large part of each raise they get.

After a few raises, people in this experiment were saving over 10% of their income, which is significant! If you had asked them to start saving 10% each month starting NOW, most (if not all) would decline.

Whenever possible you should aim to pre-commit to your goals. If possible you want to make the future action automatic. In the Save More Tomorrow plan, the increased savings would automatically go to a savings account, so you don’t even deal with the decision whenever you receive that raise.

You should be able to set up something similar at your own job.

However, there are goals for which it isn’t possible to automatically have your commitment come through. For example, if you want to get in better shape, you cannot go on a run automatically.

So what can you do here?

In these kinds of situations, you can also use precommitment to reach your goals! For example by signing yourself up for a marathon in 6 months. This will force you to train to practice because there is no way that you can run one without having practiced.

But, you may be thinking…

There is a simple yet effective way to enforce this, which is to set up a reward/punishment system in advance as well.

If you’re heavily influenced by what others think about you, you could simply tell friends and family that you will be running that marathon. Ask them to come and watch you, or even tell them your training schedule.

If you quit out, you can end up feeling stupid for not coming through.

You could take this concept even further by having a close friend or family member check in regularly to hold you accountable. Better yet, if you know someone with a similar goal, get them to commit to it together!

Accountability and social pressure can be effective tools to reach your goals!

I know some people don’t care much about what other people think about them.

First of all, good for you! If not, the sooner you can learn to not care about what other people might think of your goals, dreams and actions, the better! That’s when you can really start doing the things YOU want to do without giving a fuck about what others think of it!

However, no matter what mechanism of reinforcement you use, you need this 1 thing:

Precommitment Does Not Work Without This

Even when peer pressure is not enough for you to commit, you need accountability!

Or else, you’re doomed.

If you knew you would lose your car and house if you didn’t run that marathon in 6 months, you would train harder than anyone else to complete that goal you committed to. However, if nobody knows about this “agreement” who is going to enforce the punishment?

If you are the only person who knows about your goal and the punishment you have decided for yourself, that’s not going to work. You can easily talk yourself out if it if you have not completed the task that you wanted to complete. So always make sure that there is knows about your precommitment and rewards/punishments.

Preferably, get your precommitment in writing.

Since it’s about a date that is well into the future, you want to make sure that both you and the other person actually remember your precommitment. If the other person forgets, that’s pretty much the same thing as not having any accountability at all.