The TERRIBLE Psychology of Why New Year’s Resolutions Fail 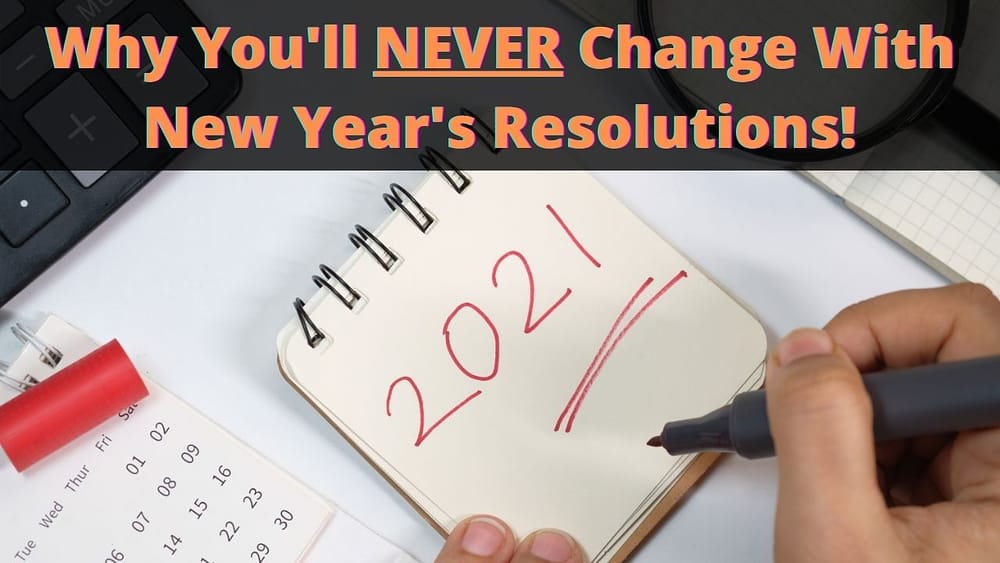 It’s almost that time of the year again…

The time where the gyms are full with new people, diets are started, people stop smoking, drinking alcohol & caffeine and do so many more wonderful things…

I firmly believe that setting new year’s resolutions is one of the biggest fads in the entire history of humanity!

But there’s some good news!

After I’m done showing you why new year’s resolutions don’t work, I’m going to share with you how to actually make a lasting change in your life!

That’s the first flaw in the new year’s resolutions psychology.

We make this a big thing!

Because of that, people often feel that they NEED to have something as their new year’s resolution, because they know every single person they know is going to ask the same damn question!

It’s being forced upon people by peer pressure!

Needless to say, any change that is being forced upon you, either by other people or by you forcing the change upon yourself in order to fit in, is doomed to fail from the very start.

You don’t really want to make the change.

And so you won’t!

The truth is that unless you feel strongly about the change that you want to make, and are dedicated to it, you’re going to give up as soon as this little gust of motivation has flown by.

The Biggest New Year’s Lie We Tell Ourselves

I can’t even understand why this thinking is a thing.

Somehow people seem to think that just because we move from 1 year to the next, everything has suddenly changed and they’re now a completely different person!

Sorry Karen, you’re the same mess you were 7 hours ago!

Changing your beliefs about yourself, your values, who you are, and what you stand for is a process that can take months or even years. Something that goes way deeper than changing a date on a calendar.

On top of that:

All lasting change comes from your unconscious. The part of our brain that’s not concerned with the idea of a “new year”, a concept that people invented. To your unconscious, it’s just another day like any other.

I didn’t know this was a thing until I started doing my keyword research for this article about the psychology behind new year’s resolutions.

But here’s something I found:

There is a huge group of people of whom I can tell that they won’t achieve the new year’s resolutions they’re setting for themselves, simply by what they search for in Google.

Those people have no clue whatsoever about what they want!

Achieving any goal is going to take a lot of hard work. How do you expect to put in the work and effort if you’re so clueless about what you actually want to get out of life that you have to Google examples?

And that brings us to one of the major psychological flaws in new year’s resolutions:

They’re nothing more than wishful thinking.

It’s not a real resolution but it’s more something along the lines of “it would be nice if X could happen in my life this year” where the person often knows damn well that it will never happen.

Let’s look at some definitions of a resolution:

“a resolve; a decision or determination“

“the act of resolving or determining upon an action, course of action, method, procedure, etc.”

Most people don’t determine anything.

Doing something with determination means that you are so certain of yourself, or so fed up with something that you know for a fact that you WILL change it, period!

And by nature, this is just not the case for new year’s resolutions.

If something is so important to you that you are determined to achieve your goal no matter what, then why didn’t you start 7 months ago?? This simply shows there is no resolve.

How to Actually Make a Lasting Change

Alright, that’s enough about why new year’s resolutions don’t work and are as ineffective as can be.

Let’s move on to the actionable part.

The first thing you’ll have to do is to get crystal clear on what you actually want to achieve. You need to have a clear idea of what success in a certain area of your life looks like.

Begin with the end in mind, the higher level:

Imagine I gave you a magic wand where, with 1 wave, you could magically design your perfect life, what would it look like?

How would it feel?
Where would you be and with whom?
What does your average day look like?
How do you see yourself in this life?

Know that nothing is off limits for this exercise!

The question you want to answer for yourself is to really figure out what an amazing life looks like for you. It doesn’t have to be the rich and famous lifestyle, it could be something simple, but it needs to be the right answer for YOU!

From there on, we reverse engineer:

What greater version of yourself do you need to become to achieve your dreams?

By answering the questions above, you will get more clarity on what you need to do. They become your goals, but unlike your new year’s resolutions, you’re getting to the bottom of why you want to achieve these things.

As with any dream, you need an action plan!

If you’ve followed the steps above, you’re ahead of almost everybody in the world! Most people blindly set goals and resolutions without first figuring out what they truly want to get out of life!

The next part is to create clear, magnetic goals and matching habits.

When setting goals, most people do so in a way where it makes them less likely to achieve anything, not more. Avoid these 8 goal setting mistakes at all cost and follow the framework I outlined in that article.

But goal setting alone is not the answer!

Next up, you’ll need to figure out what actions you can take on a daily basis to get you towards your goals. And then, you’ll have to turn those actions into habits, so that you can make process every single day.

That’s the key to achieving your goal.

However, most people go about forming great habits the wrong way!

Ever heard yourself or someone you know, who hasn’t worked out all year say that they will go to the gym for 2 hours, 3 times per week? How did it work out for them?

Oftentimes the reason why people struggle to develop new habits is because they want to create habits that are way too big. They’re so intimidating that they feel so daunting people often quit them!

So, what’s the solution you ask?

Simple, why your goals should be huge ones that you can get fired up about, your habits should be tiny. Seek to develop habits that are so small that there are no excuses.

I’ll teach you exactly how to do this in this free training!

The key here is to get you started!

The smaller the habit, the better your chances of you actually getting started. And once you’re doing something, it becomes infinitely easier to get in the flow and keep on going!

I have the writing habit of 2 paragraphs each day, but oftentimes I end up writing over a thousand words in each sitting after I get into the flow.

In order to change your life:

Beyond that, all it takes is to stick to those habits and keep on making progress forward!