Perfectionism and Anxiety: Why Being a Perfectionist Is Ruining Your Life! 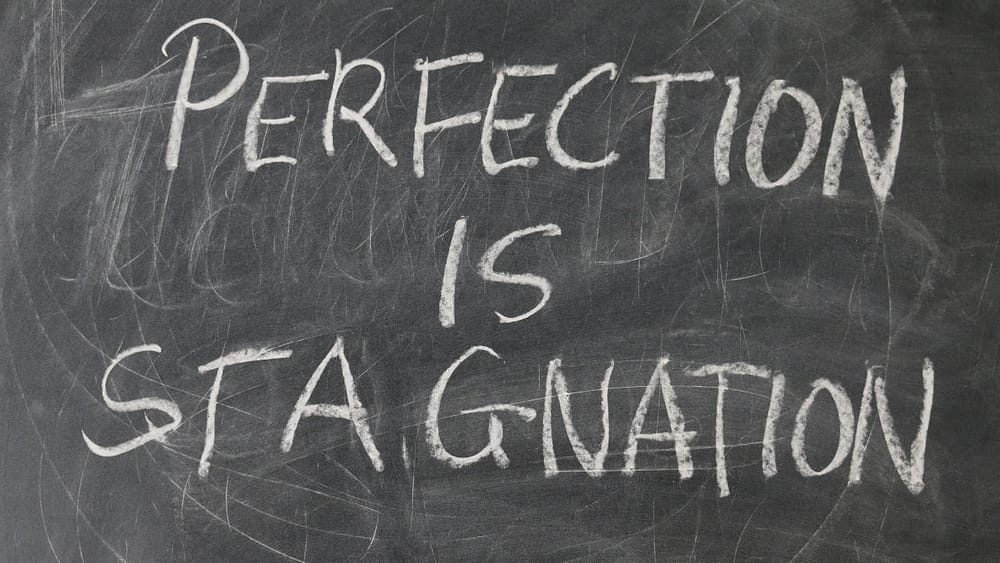 There are way too many people who take pride in being a perfectionist even though it is one of the things that is literally ruining their confidence, motivation and their life in general. In this post, I’m going to be challenging perfectionism and show you why nearly all perfectionism is dysfunctional.

You’ll see why perfectionism and anxiety are two sides of the same coin and get advice on how to stop your perfectionism.

The Truth About Perfectionism

It does not exist!

There you have it, perfectionism is bullshit! What we call perfectionism these days is nothing more than an excuse. In reality, it is simply the socially accepted term for insecurity! When you say you’re a perfectionist, most people will see that as a positive trait.

The reality is that the vast majority of people who say they are perfectionists are in fact just scared that people don’t think their work is good enough. They want everything they do to be perfect and only then do they want to present it, because they fear people will look down upon them otherwise.

The main issue is this:

Our fears, insecurities and emotions lie at the unconscious level. We don’t really understand why we feel the need to do certain things, we just feel. And afterward, we try to rationalize these feelings, which is when we come up with certain terms to describe that which we don’t understand or grasp.

Ask yourself this if you consider yourself a perfectionist:

What do you think will happen when you’re not perfectionistic? How would people react?

Perfectionism is often linked to anxiety, because it’s just fear in disguise. The fear of judgment is a fairly common fear and something that gives many people anxiety. So if you have experienced perfectionism and anxiety at the same time, that’s most likely the reason why.

Let’s look into some common causes of anxiety.

Some of the fears that cause people to feel anxious or even having panic attacks are the fears of confrontation, (negative) social interaction, and rejection. These are crippling fears to some people. In order to avoid them, we often try to just show our good side, which is the root of perfectionism.

It makes perfect sense if you look at it:

One of the things that these social fears or phobias share in common is that they limit people in being themselves. They lead a person to do and say less, because they fear that will not like what they do or what they say. It’s a crippling fear that leads to a lot of social anxiety.

People then think that only showing the pars of themselves and their work that they deem perfect is the solution.

The first thing you need to realize about these insecurities is that it is not about other people at all! Perfectionism and anxiety are so closely linked because they are all about YOU. It’s your own standards and judgment of yourself that is holding you back. Besides you, nobody cares!

We’ll go into that in more detail later on.

One of my early mentors, Brendon Burchard once said:

Perfectionism is a stealer of dreams!

There’s a story that I have heard dozens of times over in business:

Someone has found a gap in the market that they intent to fill. The work hard on creating the product, they pour their hearts and souls into it and after all the efforts they have their final product ready. However, instead of launching, they spend weeks or months to tweak small things, improve it or do something a bit differently. All because of “perfectionism” a.k.a. the fear that the product’s reception won’t be great in the current state.

And time and time again, they get beaten by someone who launched with a worse version than what they have.

While they are dwelling about making everything perfect, the other company launched, made sales and got customer feedback. By the time someone finally releases their “perfect”version of the product, the competitor is already way ahead in brand recognition as well as the product, because they have gotten feedback!

But it’s not just in business!

Have you ever thought about learning a new skill, starting a creative side product, or do anything that you’re not used to do, but don’t take action on it because you think it’s not good enough? Perfectionism breathes procrastination because you will keepdoubting yourself over and over again!

Compare that to those who take action:

Not only do they get way more done, they grow way faster.

Even if you are way better at what you do than almost everyone, if you don’t go out there and produce (to take massive action), you will fall behind! Done is better than “perfect”! Otherwise, those who do put themselves out there will be quick to overtake you.

How to Overcome Your Perfectionism

This will take a shift in your thinking and mentality.

The first needed shift that you need to be making is how you think about failure. If you need a great take on this, watch this short video from Sara Blakely the founder of Spanx. Now imagine if she was a perfectionist, she would never, in a million years have gone through all the trial and error to succeed!

So what can you take from this in terms of perfectionism and your mindset?

You need to fall in love with failure!

I know that this is something we don’t like to do in our society, because failure is painted as a bad thing. However, I can assure you that literally everyone you look up to, whether it’s successful business people, influencers, celebritities, authors, or literally everyone successful, each and every one of them will have failed way more times than you have even tried!

That’s WHY they are successful!

Failure is not the opposite of success, it’s the foundation. If success was a house, failure would literally be the bricks. Only held together by the concrete of continuous action, getting feedback from failure, learning your lessons and going at it again.

Your first step is to fall in love with “failure”.

I’m putting that in air quotes, because it’s not really failure, you only fail when you either give up or become so scared that you don’t dare to take action anymore! Everything else isn’t a failure, it’s simply feedback. It’s a lesson you can learn from your experience so that you can do better next time.

Go Fail at something at least once per week!

Try new things or different methods, seek to improve yourself, ask for help if needed, aim for a higher level, etc. Do whatever it takes for you to get yourself out there taking action! It might be scary for you to drop the act of perfectionism and face your fears, but it will be worth it!

It Will NEVER Be Perfect!

There is only one way in which you’ll be able to improve an get to the level where you feel that you’re performing at your best and that is to go through the struggle of practice! There aren’t any shortcuts! If you want to be good at something, you’ve got to suck at it first.

Change Up Your Self Talk

Overcoming perfectionism and anxiety is an inside job.

Meaning that it’s not about the outside world at all, it’s about you.

You’re literally in your head 24/7 talking to yourself. Because you’re here reading this, chances are that you are your own worst enemy because of the way you talk to yourself! When you talk badly about yourself and your achievements, you rob yourself of your own confidence and happiness.

Do you know the saying “Don’t do upon others what you wouldn’t want to have done to you?”

If a friend of yours was telling you that they messed something up, you would comfort them and help them take care of the problem. If someone tells you they’re afraid to share their work with the world, you’d encourage them and tell them how good it actually is (given that it’s not crap lol). You’re a loving and compassionate person towards others…

So why are you so hard on yourself dammit?!

The Paradox of Perfectionism and Vulnerability

You may want to only show your best side to other people because you think they’ll think higher of you and like you more. But in most cases, it’s actually the opposite in the sense that trying to portray that perfect version of yourself leads to less likeability. Unconsciously, it just feels fake to people.

You’ve probably felt it yourself sometimes.

When meeting someone, they may seem like great people, but you have this feeling inside of you that they’re full of shit! They will present their best self, but you instinctively see through the whole charade.

Want to know some real magic?

Let me tell you this:

If you’re escaping into perfectionism, because you’re afraid of what people would think of you when they see your “imperfect” side, this is your call to let go of that fear!

The final and perhaps most comforting mindset I can give you is this:

People do not care about you!

You may say something weird or do something awkward and you’ll be beating yourself up about it the entire day. But in the meanwhile, the other people around you will have moved on about it within a minute! While you’re dreading moments from the far past, they will have long forgotten everything about it!

You may be afraid of social situations or have anxiety, but other people have the same thing! They may have different problems, but just like you, they are stuck in their own heads thinking about THEIR problems, awkward moments and lives. They’re too busy to care about your small mistake, because they have their own things going on!

You are by far the person who cares most about you!

Stop dreading over things in the past that everyone else has long forgotten about. They’ll be moving on in minutes or even seconds, so why would you hang on? If you get into that mindset, you’ll notice it’s one of the most liberating mindsets a person can have!

It takes the spotlight off of you.

As you’ll have seen, perfectionism and anxiety aren’t just linked, they are two sides of the same coin.

And while it’s difficult, you can overcome your perfectionism so that you may become a way happier and more productive version of yourself! You’ll truly be liberating yourself when you can let go of your limiting beliefs and self talk!

As a parting, I’ll say this:

Go fail at something today you imperfect son of a bitch!