The Confirmation Bias: What it is and How it Messes Up Your Thinking! 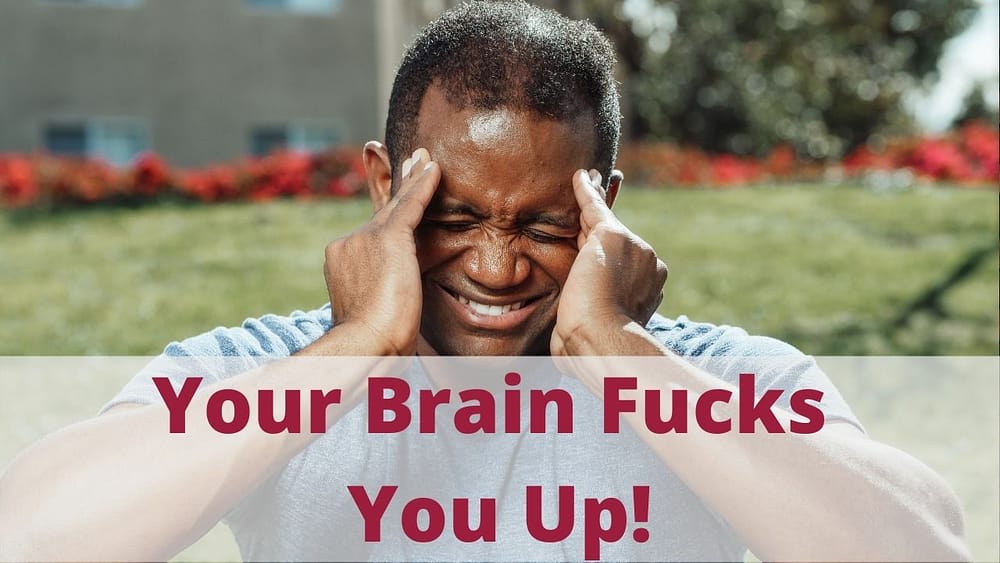 Your thinking is seriously fucked up!

And so is mine…

The fact of the matter is that we as people are not nearly as rational as we like to think we are. Our thinking is skewed in certain ways where we consistently make decisions that aren’t in our best interest.

Fortunately, there’s a good side to it:

These thinking errors (we call them cognitive biases) are not random. They are systematic patterns, meaning that if you are aware of them, you have the ability to realize what’s going on and correct your thinking.

There are a lot of different cognitive biases.

In this blog post I’ll cover the confirmation bias.

But before I give you the meaning of the confirmation bias as well as examples, I simply have to talk about the brain.

The Different Parts of Our Brain

2 of these are important to understand:

The above is a bit simplified, watch this if you want to learn more about the 3 brains we have:

The primitive part of your brain has 1 main goal: survival.

In prehistoric times our cavemen ancestors didn’t have the time to apply rational thinking, since that takes way too long. Additionally, their thinking capability was limited, so “rational” thinking costs a lot of energy. And so, this part of our brain doesn’t use sophisticated logic or reasoning.

Your Reptilian Brain has a few tools it needs to function:

Sidenote: This part of your brain does a lot of good things! If you were at a restaurant and you would actively hear and see literally everything – every movement of every person, sounds of chewing, cutlery, moving of chairs, the flickering of candles, every conversation, etc. – you’d go insane within seconds. Luckily this part of your brain acts as a filter so you don’t have to consciously pay attention to everything.

The Reptilian Brain vs. The Snake

Most of the time, your reptilian brain is actually right.

It’s why people say to trust your gut. It’s goal is your survival, so if you feel uneasy or unsafe in a certain situation or get a bad vibe, it’s probably a good idea to listen to that feeling! You have likely unconsciously caught on to warning signs that you haven’t consciously processed.

The first because of the way in which information is deleted, distorted and generalized. Remember that this part of your brain is pretty primitive, so information isn’t that detailed. Additionally, your brain tries to keep you safe, and it is overly cautious.

Let me give you an example:

You’re walking through the forest, enjoying some fresh air. Then, on the ground, you see this squiggly thing… you jump back! After all, you’re about to be attacked by a snake!

As you take a closer look, you realize it wasn’t a snake after all, just a branch shaped like one! Your brain protected you by distorting your visuals and making the connection to a potentially dangerous animal. There wasn’t any to begin with, but your brain didn’t want to take the risk.

Imagine it was the other way around.

There is a snake, but you dismiss it as being a branch. You could die in that case! Your mind takes looking squeamish over endangering your life any day of the week! The consequences of taking protective action even when there is no real danger are way lower than not acting on a potential danger.

Hopefully, that helps you understand how your brain works a bit better!

So What Are Cognitive Biases and How Do They Work?

I know this was a long intro… I really do!

If you know my methodology, you know I always start with establishing the foundation and root of a problem. The reason for that is simple, write this down:

“If I do not understand the problem, finding the solution will be nigh impossible!”

So what is a cognitive bias?

The keyword here is systematically.

That’s actually a good thing. If these thinking errors were random, there isn’t anything we can really do about them. But now we can understand the patterns and act upon it.

So, let’s zoom in on the confirmation bias.

Here’s the meaning of the confirmation bias:

The confirmation bias screws up your objectivity.

Rationally speaking: you would look at an issue, research both sides, weigh the pros and cons and then take a stance or make a decision. You would be completely impartial and examine the facts before making up your mind, but that’s often not how we do things.

When you do that research, you read an article that opposes your view and you’re a bit skeptical. You then read something that supports your view and you go like: “I fucking knew it!” and you take it as a fact right away.

A “fact” that may or may not be true of course.

That’s the confirmation bias for you.

You could say that the confirmation bias will support whatever you believe or WANT to be true. Your brain has a need to stay consistent with what you think is correct and who you think you are.

Also note that a lot of these beliefs are unconscious, making it even more difficult.

This one goes out to flat earthers.

For some reason, quite a few people still believe this ridiculous idea. Part of what keeps this idea alive is the confirmation bias. Two other major factors are the ingroup outgroup bias and cognitive dissonance, but I’ll cover those in a later post.

As for the confirmation bias:

You can put 20 scientific papers in front of them that disprove their belief, and they’ll think it’s a conspiracy (cognitive dissonance). Their minds are doing some mental gymnastics easily worth a gold medal in order to “disprove” what they don’t want to believe. They’ll critically examine everything and come up with ways in which it’s flawed (even when it isn’t).

If after that, they see one article written by a delusional giraffe that supports their ideas, they’ll accept it without question. After all, they already “know” that the information is correct.

That’s an example of the confirmation bias.

How the Confirmation Bias Can Destroy Confidence

This one hits quite hard for a lot of people.

Many people don’t feel pretty and/or are extremely insecure.

Here’s how the confirmation bias affects them in real life:

They meet a few friends and some strangers along the way. This person gets multiple compliments on how good they look, how fun they are to be with and how excited they look to be there. Genuine compliments from the people around them.

They brush it off!

And then, on the way back, they meet their roommate who says:

“Are you okay? You look exhausted!”

And then the confirmation bias kicks in…

“Oh my god! See, I Do look terrible, I am ugly, I am dull, boring, I told me so! I knew they were just being polite earlier…” That kind of internal thinking would go off in someone’s mind when they hold these kinds of beliefs about themselves. Even when nobody has even thought those things about them throughout the day!

And so they ruin their entire day, along with their confidence and self-esteem because of this cognitive bias…

It’s a real shame there are plenty of people like that out there!

So how can you protect yourself against this cognitive bias?

You cannot stop this thinking pattern, as it is deeply rooted and it automagically fires off unconsciously. Instead, the keys are recognizing it or better yet, taking systematic actions to prevent the confirmation bias from doing harm in your life.

Let’s start with recognizing it.

You now know you’re more likely to believe information that confirms your beliefs. Regardless of whether those beliefs are true or whether they’re helpful to you.

So whenever you instantly identify with information, take a second to pause and think:

You can use the same logic when you find yourself immediately rejecting new information or ideas. Question everything when you think you may be affected with the confirmation bias. You should absolutely be using the Neocortex (the rational brain), especially when it comes to important things in life!

Charles Darwin and the Confirmation Bias

Charles Darwin had his own method of dealing with the confirmation bias. Because he knew he was prone to it, just like we all are.

His method is simple, yet incredibly effective!

And not just the most effective method for overcoming the confirmation bias systematically, but for your life in general! If you do this, you’ll become smarter and wiser every single day.

So, how did Darwin protect himself against the confirmation bias?

He had his special notebook where he wrote down everything he observed that contradicted his beliefs. He would then investigate these things further whenever he had the time to do so.

In other words, he was looking to be proven wrong!

For a lot of people, being proven wrong can be a big hit to their ego. But in reality, this is a growth mindset. It’s realizing that you don’t have all the answers and know quite little, while being open to learning new things.

It’s one of the best ways to grow as a person.

Plus, you avoid the confirmation bias this way as well.

Realize that the confirmation bias will not go away, just like the other cognitive biases that we all have.

If you’re not aware of a bias or an issue in your life or your mindset, then you cannot solve that issue. That’s how simple it is.

So, for solving this bias:

Whenever you hear something that confirms your beliefs, take a moment to step back and reflect upon it. Know that your mind wants to stay consistent with who you think you are and your beliefs.

It wants to accept whatever is consistent!

Don’t let it do so freely!

On the other hand:

Whenever you come across information that contradicts your beliefs, examine it! Your mind is dismissive automagically because it’s not congruent, but the information might be correct. So this is a dangerous practice!

You should know that you know very little.

There are always things you don’t know or are misinformed about. That doesn’t make you dumb, that’s just reality. The more you learn, the more you realize how little you know! There’s just too much information out there for a single person to learn in a lifetime.

For overcoming confirmation bias, remember Charles Darwin’s method of writing down everything that contradicts your views. Then research those things to find out the truth.

Make sure to keep on reading posts from The Unchained Life to learn about the other cognitive biases that screw up your thinking and learn how to improve every area of your life! 🙂