How to Deal With Trolls & Mean Comments Online Easily 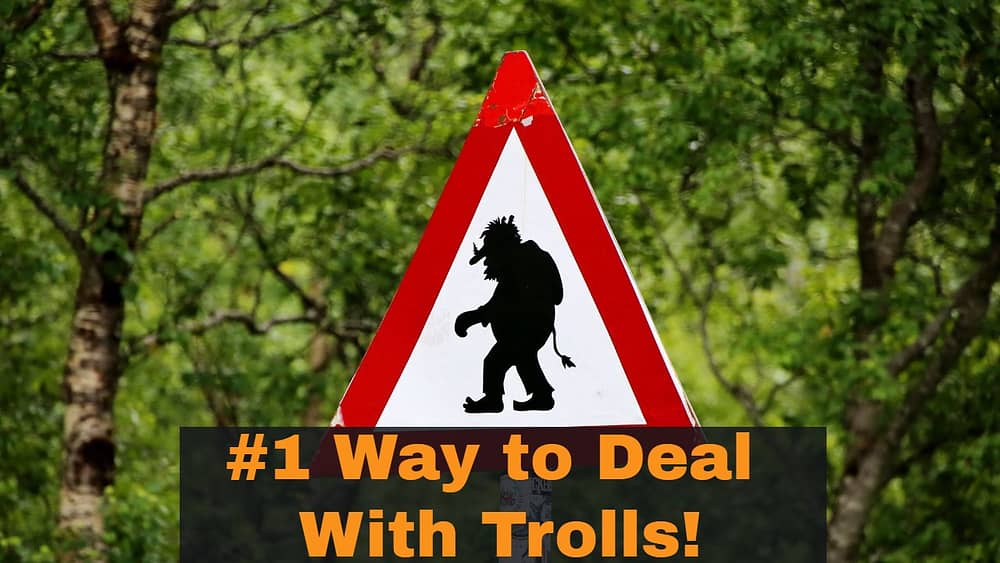 Everyone deals with trolls, haters and mean comments at one point or another, especially online.

It can hurt quite a bit too!

So how do you deal with trolls and haters? How do you handle those mean comments? And most importantly, how do you protect your mind against them, so that they don’t bring you down?

That’s what we’ll go into here.

Once you’re done with this article, you’ll know what to do against trolls and mean comments.

What is a Troll?

Let’s start with the definition of a troll so that we’re all on the same page:

A troll is someone who deliberately posts hurtful or provocative comments online just for the fun of it. They enjoy seeing people get mad or breaking people down with their comments.

All while being anonymous of course.

If you met them in real life, they would probably not even have the nerves to talk to you, let alone say anything mean to you.

The Difference Between a Troll and a Hater

You’ve undoubtedly heard of the term hater as well.

At first sight, they may seem the same as trolls, because both will post mean comments. However, whereas a troll will do it for fun, a hater will do so to vent their own feelings.

Things like anger, jealousy, loneliness, fear, and other negative emotions.

These people are not in a good place mentally. They’re feeling bad about themselves. And instead of building themselves up, they take those feelings out on others and try to break them down instead.

An Example of Hate & Mean Comments

To illustrate my last point, allow me to share an example of a hurtful comment I got the other day.

I wrote this post on Reddit on how your language and the story you tell yourself affects your life. The post got multiple awards, almost 700 upvotes and a ton of comments and messages from people sharing how much the information meant to them.

“I can’t even express in words how much I despise this post.  I spend every single day trying to hype myself up only to feel like absolute gutter trash no matter what.

Oh. But I should worry. Some moron who had to consult a proctologist to pull this massive article of nonsense out of his ass said everything will be okay if I just think nice things about myself.

Not only do I hate this post, I despise you for posting it. I hope reality smacks you in your thick skull soon enough.”

A few minutes later I also got this private message from the same person:

“Hey. You. I just wanted to let you know that I hope you fucking get hit by a bus. Peddling this self help nonsense is nothing but blowing smoke up your own ass to make yourself feel better. Do us all a favor and go for a walk with blinders on.”

Some guy telling me I should kill myself.

How to Handle Negative Comments Online

So here’s how to deal with trolls and haters online:

It’s never a good feeling to be hearing things like this. It doesn’t matter if it’s about your looks, age, gender, beliefs, ideals, family, etc. Trolls and haters can hurt.

After those initial couple of seconds, you have the choice in how you handle mean comments.

The first thing I do when receiving feedback, criticism or negative comments is to take an objective look at it. Is there even the tiniest bit of information that is true and that I can use to learn from?

In this case, there wasn’t.

But there could be.

We are sometimes too quick to dismiss legit feedback or criticism as them being mean or trolling. It may very well be that there is some truth to it, some lesson that you can learn to be a better you.

Always be looking to improve, even it it’s coming from someone who wants to break you down!

While it takes quite a bit of confidence, looking at it this way can be great for your growth! Even though they meant to hurt you, they may have given you a piece of knowledge you can use to build yourself up stronger.

So that’s the first step in handling haters and trolls.

In taking this honest look, you also prevent yourself from getting angry at someone (who might mean well) when in reality, you’re mad at yourself! Blaming others is easy. Working on the things you know (deep down) you should improve takes strenght.

What You Need to Know About Haters

The guy in my example falls into this category.

In this case it’s pretty obvious that the guy in question has quite a bit of mental issues. In a lot of cases though, it won’t be as obvious. However, in almost all cases a hater will be feeling bad or terrible mentally.

Let me tell you this:

Know that it’s not about you.

The comments made by haters say way more about them than they ever will about you. It showcases their own negativity that they project against you.

What You Need to Know About Trolls

They’re not in a great state of mind either. However, it is often boredom that is at the core of their “motivation”. These people have so little going on in their own lives that they decide to rile others up online to pass their time.

Who are they to give you shit? Why would you care what they think? Why do you want their approval?

How to Deal With Trolls & Haters?

When I got those hateful messages, I didn’t feel any anger towards him. Nor did I feel hurt or saddened by his words. Instead, more than anything else, I felt pity for the guy.

If there is one thing to take from this, it would be that negative comments are rarely about you! Instead, it’s a projection from THEM and their negative emotions that they need to vent in some way.

While a bit silly perhaps, it kinda looks like this:

While your first reaction might be to want to scream back at the person attacking you online, DON’T!

This is the place to be the bigger man or woman.

Instead of fighting against them, be kind.

Do this for a few reasons:

So what kind of response should you give a troll?

Here’s my own example:

“I’m sorry that you feel that way. While I don’t know what happened in your life that makes you feel this way, I do sincerely hope you’re getting out of this rut soon!

I never claimed this to be a magic pill though and changing your thoughts and life takes time. Wish you all the best in the recovery process!”

No harshness or anger back at them.

The only thing that I might have changed after reading it now is the 2nd paragraph. At the time I felt the need to correct him, as it seemed from his comment that this is some magic trick to get instant success. It’s an important distinction in mindset.

However in his state at the time chances of him accepting the information were slim to none. Another more supportive message would’ve been better in my opinion.

Stop Mean Comments from Getting You Down

As a final piece of advice:

How do you brush off negative comments easily?

First, check if there is some validity to what is being said. If there is, don’t project them back at someone else. That puts you in the same spot as a hater or troll!

Remind yourself that the comment is most likely not actually about you, but rather about them! So don’t take it personally! Learning to not give a fuck about their comments is a great start!

“All the water in the oceans cannot sink a boat unless it gets inside of it.”

The same goes for your mind.

As long as you decide not to let their negativity inside, you can brush it off and not let hateful comments get you down.

Trolls and haters are to be pitied in my opinion, not to be dreaded.