Are You a Nice Person or a Manipulative Bastard? 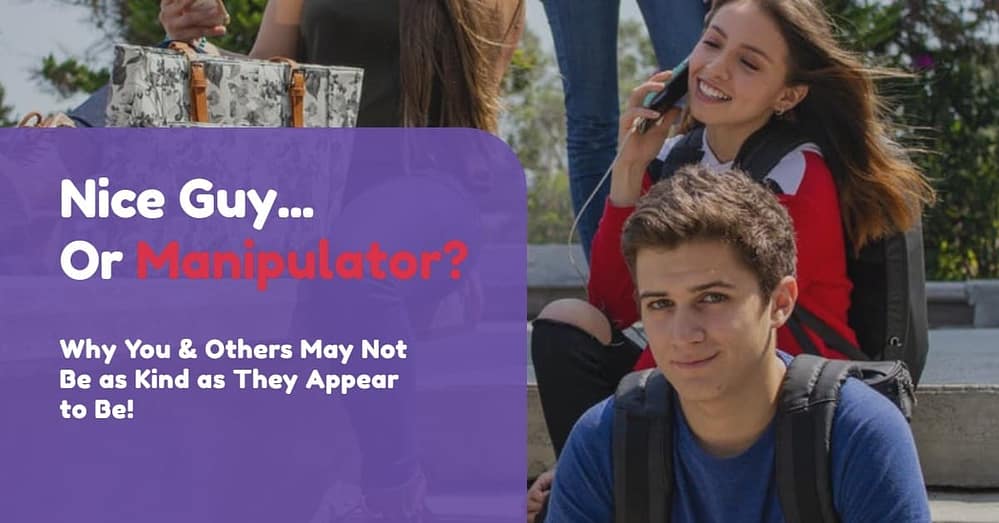 And do you even which one you are?

Many people want to know how to be a nicer person, and plenty of others believe that they are, when they really aren’t! Oftentimes without them even realizing it.

Oftentimes the difference between a manipulator isn’t in the actions they take or the words they say. The difference, more often than not, is in the intent behind those actions.

It’s a story you hear regularly.

The “nice guy” will say things like “I’m always nice to women, but they don’t like nice guys, which is why I’m still single.”. They’ll also regularly claim to be friendzoned.

No offence if you feel like you’re in this category. I do truly believe that you mean well, and that your intentions are good! However, there’s a flaw in the mindset, which I hope to expose and change in this post.

Many people seem to have the idea that “If I help her enough, say nice things and open doors for her, she’ll love me”.

They seem to think that because you do something for someone that they never asked for (or might not even want), that this person now owes you anything.

That’s not the case!

In fact, if you do this, you are NOT being a nice guy or girl!

You are doing nice things for someone because you want to get something from another person (whether material or a feeling), not because it’s a kind thing to do! And that my friend is nothing more than manipulation!

You’re using your kind action to gain something yourself.

Another example could be a girl flirting with someone she has no interest in, in an attempt to get him to help her with something. It’s way more common than you would think.

As with most behavior, it does NOT mean that if someone does something kind, gives you something, or is flirty, that there is a hidden agenda. An act of kindness is a real thing and a wonderful one at that!

There doesn’t have to be a hidden agenda.

Rule of Thumb for Nice Guys (and Gals):

When deciding whether or not to do something for someone, ask yourself if you would do the same thing if there was no gain whatsoever for you.

If the answer is “No”, then there is a good chance it’s not an act of kindness, but manipulation! If you wouldn’t do it out of the goodness of your heart, then there has to be something you want in return.

Please take this to heart though:

If you think you’re a nice guy or girl, don’t stop being one! Being nice and helping a fellow human being are wonderful things! Don’t stop doing that, just let go of the idea that you should get something in return (feelings or otherwise)!

The topic of attracting someone is one for another day, but here’s a YouTube channel I found where you can work on some social skills.

Nobody Likes a Suck Up!

Now there’s another kind of person we need to talk about if you want to learn how to be a nicer person.

And that’s the suck up!

We all know someone who suddenly becomes incredibly complementary and oftentimes gets him or herself out there even more when a person of status is in the room.

Again, the behavior is not being nice.

Sure, a compliment always feels good, but in a situation like this it might come across as not genuine because it often isn’t. Again, there is a hidden intent beyond saying what’s on your mind with your compliment.

It’s just a way of getting closer to someone who can help you get ahead.

In this scenario as well as the previous one, there is certain behavior that is great in and of itself! However, when you mix it with an agenda that is anything else besides you being a nice and kind person, it’s suddenly not nice anymore.

That’s when it becomes manipulative!

If you want to make a compliment to someone of a higher status, only make those you mean 100%. Try to be unique about it so that it’s something they haven’t before.

Suck ups are often scared to do that.

What About Being Taken Advantage Of?

This is a concern for many people.

They fear that if they’re being nice to others, then they will get taken advantage of time and time again.

The truth is, that that is impossible.

We’ll go into it in a bit, but when you do something nice, you should do so because you want to genuinely help someone or do the right thing. You do it because it’s the right thing, and you feel good by doing so!

People often feel that way when the other person doesn’t help them out in turn. It can feel like you’ve been used, while in fact you were the one who did an act of kindness without being asked to.

There will be people that will ask things of you, just so they can take from you, without ever intending to return a favor.

Ask yourself the same question I told you about earlier:

Do you want to do the request for this person, even if you knew, you would in no way, shape or form get anything out of it? If you tell yourself that the answer is “No”, then say that to the other person as well!

If a friend asks you to help him/her move, that’s completely different from a vague acquaintance. In the latter case, it could be appropriate to ask for compensation. Or it might not be. It all depends on the situation.

A quick lesson in karma:

It’s the idea that if you’re a better and nicer person, then better things will happen to you. And while I do believe this to be the case most of the time, there is a caveat that I should mention:

You don’t always get from the same person you give to!

In fact, most of the time it doesn’t!

Again, let go of the want to get something in return for you being the kinder person, and you’ll never be taken advantage of!

How to Be a Nicer Person For Real

There are many simple ways to make someone’s day.

It could be something as simple as picking up something someone else dropped, bringing a bottle of wine to a movie night (without being asked for it), even just smiling to a stranger, or giving a heartfelt compliment to them can do wonders.

It doesn’t really matter HOW you’re becoming a kinder person.

The key is simply this:

Feeling positive and happy as the person you are, and doing what you can in the moment to share that happiness and kindness with the people around you. Without any expectation of reciprocation.

In every interaction with someone, you are 100% in control over the attitude that you go into the interaction with. Focus on fun, positivity, respect, and kindness, and that’s how you’ll often be perceived.

That’s it, there’s no secret!

Of course, there are things you can do to be a better conversationalist, body language, and much more to be seen as a nicer person.

I’ll cover those topics some other day, but for now go into every interaction with a positive attitude, a big smile on your face, and most importantly: without any hidden agenda!

Just that alone moves you from a manipulator to an actual nice guy or girl!