Don’t Put Things Off! The 2-Minute Rule to Stop Procrastination 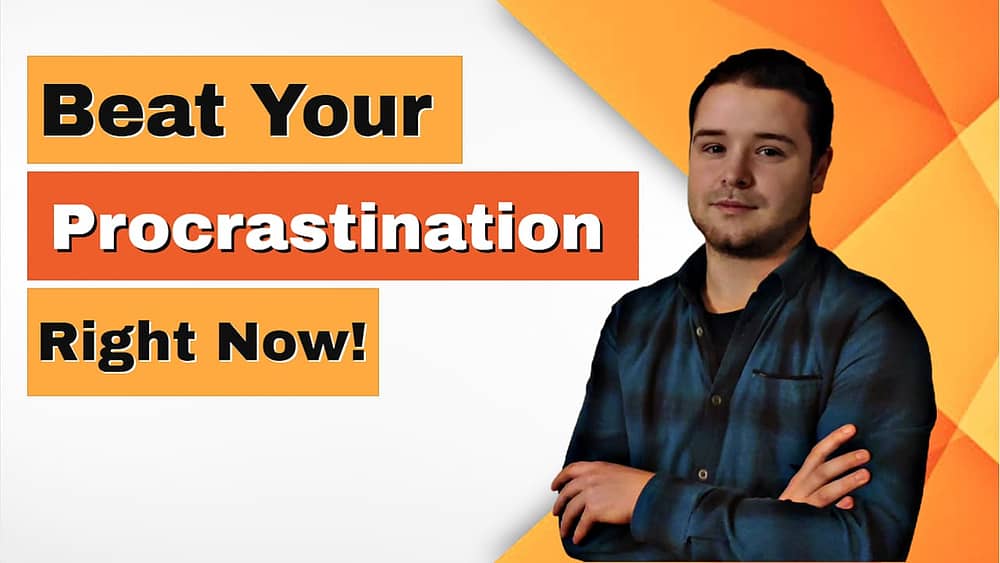 Let me ask you an earnest question:

Do you find yourself procrastinating regularly? Putting things off that you know are important to you and your goals, but somehow you can’t get yourself to put in the action required.

You are definitely not alone!

Many people suffer from procrastination to some degree, myself included.

In this article I’m going to be sharing a method with you that I use myself to help overcome procrastination, with pretty decent results. I can’t honestly say my habit to procrastinate is completely gone, but it’s definitely a lot better.

And it’s because of the 2-minute rule of procrastination.

Here’s how it works:

The 2-Minute Rule of procrastination states that if something takes 2 minutes or less to do, you should do it right now instead of putting it on your to-do list.

Keep on reading to learn how to use it to beat your procrastination!

Let’s start with the core of the problem.

I cannot talk about procrastination without mentioning this article about why procrastinators procrastinate. It is the only article I read that really made sense to me since it’s clearly written by a procrastinator.

You know what you want and the things you need to do to reach those goals. It is the part of you that chooses the tasks you should be doing, it is what Tim calls the rational decision-maker.

However, there is someone else…

While the course of action set by the rational decision-maker is what will bring you the most happiness long term, this creature doesn’t care about the long term. The only thing it cares about is the here and now.

You probably experienced it:

You know you should get started on that report. You know that if you put it off until later, you’ll be under a lot more stress and the quality will be worse. Yet there is that voice that says “you’re already tired, and should watch some tv to unwind before starting”.

It’s what Tim calls “The Instant Gratification Monkey” in action.

When you give in, you give up the discomfort, displeasure, or consequences in the future for pleasure in the present. Inside the procrastinator’s brain, it is often the monkey who’s in charge.

The Problem With Doing the Right Thing

There is often a choice between doing what is right, and what is easy.

The activities you should be doing can seem like a lot of work. Things like writing that 3000-word paper, going for a daily 10-kilometer run, or creating something for the business you like to start are big daunting tasks!

It can feel intimidating.

If you feel a certain task will be unpleasant, your brain wants to stay clear from it. This is exactly why the 2-minute rule can work so well.

The 2-Minute Rule in Action

Here’s a situation from last year:

I got a message from somebody that I needed to send an email to somebody else, a simple task all things concerned. However, at the time I was having breakfast, so I didn’t send the email right away.

And then I forgot…

Occasionally, I would remember that I still needed to send the email. It was often at “inconvenient” moments though. When being with friends, biking somewhere, eating, and things like that.

Even worse, I had spent way more time thinking about it than actually sending the email.

How to Use the 2-Minute Rule

If you have any tasks that can be completed within 2 (or perhaps 3-5) minutes, then do it right away!

If you’re doing another task at the moment when this short task comes in, drop it! Take the 2 minutes it takes to get the short task over with first.

It will save you a lot of time!

Think of tasks like making an appointment, sending an email, calling someone, writing a post for social media (if that’s work for you instead of pleasure), and many other trivial tasks.

I can virtually hear you thinking:

“But, the things I need to do to achieve the next level in my life take way longer than 2 minutes. Wouldn’t this method be completely useless in my situation?”

The key is forming habits.

If you don’t have the results you want in your life, check out this free training on building strong, sticky habits.

You wouldn’t sit down and write a book in one go. Instead, you make it a habit to sit down every day to write parts of it. You don’t build a business in a day, and your health requires continuous effort as well.

This is where you can use the 2-minute rule:

To give you an example, I could have set myself the goal to write an article every day. As a blogger, putting content out continuously is an important task after all.

So it would make sense to set a goal like that, right?

Writing a full article is going to be over 1000 words most of the time. It is one of those tasks that can feel daunting, especially for someone who’s prone to procrastination.

So what goal did I set?

Instead of setting myself the task to finish an article every day to form my writing habit, I made it my goal to write a sentence! Yes, that’s it. A mere sentence every day is what I set myself to do.

After that 1 sentence I’m free to quit if I want to.

It’s my way of using the 2-minute rule to stop me from procrastinating.

The main issue for most people, which you might recognize, is to get started on something. Once you’re actually in the process of doing something, it’s way easier to just keep on going.

If you’re doubting if this method really works, I would like to inform you that the entire article you have been reading so far has been written in 1 sitting. It was not written in separate 1-sentence sittings.

I use the 2-minute rule to create mini-habits that get me started. And once I’ve started it becomes infinitely easier to keep on going!

The power of the 2-minute rule is to create an easy task, something you can form into a habit!

How to Stop Procrastination

If you want to stop your procrastination or at least reduce it as much as possible, then you need to create 2-minute tasks for yourself.

Something that’s easy to pull off.

You get the point.

You want to take your goals and create bare-minimum tasks for them. The entire goal of the 2-minute rule is to create tasks that seem easy and quick to complete.

This then puts you in motion, which makes it infinitely easier to keep on going!

Take it from a now-productive procrastinator:

Putting things off usually occurs because the task you know you should do is large and feels intimidating. In order to crush your procrastination, you should create small easy tasks to get yourself in gear!

Even if you’re skeptical, give the 2-minute rule a go!

I’m curious to hear about your success and renewed productivity! Try out the method I’ve described here and then leave me a quick comment below with your experience.

Ps. If you know any chronic procrastinators, send them the link to this article. (it takes less than 2 minutes 😉 )